RasPiO Inspiring is a system of programmable RGB LED boards which can connect together to make whatever 2D or 3D shape you want. Make a…

Or embed them in any project that requires really fine control over colour and intensity of light. 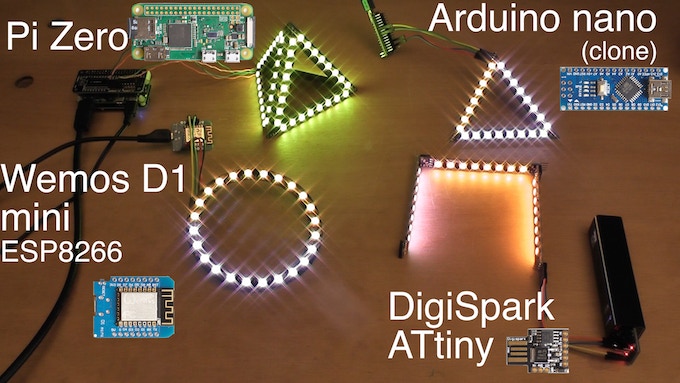 Controllable by Virtually any Platform

RasPiO Inspiring can be controlled by most popular electronics platforms, including…

You could even control it from your phone, if connected to wifi-enabled device like the Pi Zero W. Open a port on your router and you could switch on your ‘TV simulator’ if you’re away from home (make it look like someone’s home watching TV).

But you can also hook up all sorts of other control mechanisms too, such as light, motion, sound or temperature sensors to trigger your LEDs.

All the boards are based on 1cm LED spacing and 10cm side. Through-holes enable use of standard 2.54mm headers, or you can wire directly to them if you prefer. Each shape has at least one set of inputs and outputs so they can be ‘daisy-chained’ together. The straights have 3 sets of input/output holes so they can be connected at 180°, 90° or 45°.

Driver – pHAT-sized driver board for Raspberry Pi with a buffer chip to handle the 5V logic levels and a space for external power if needed. Pi GPIO ports are broken out and there is space for an optional ADC, which enables control of your LEDs with potentiometers or sensors. 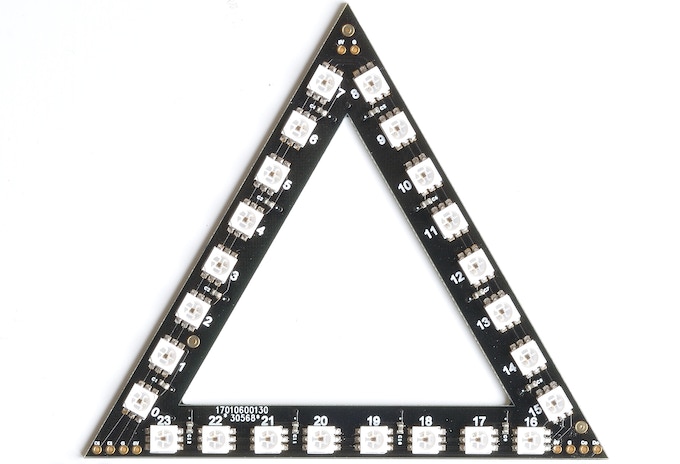 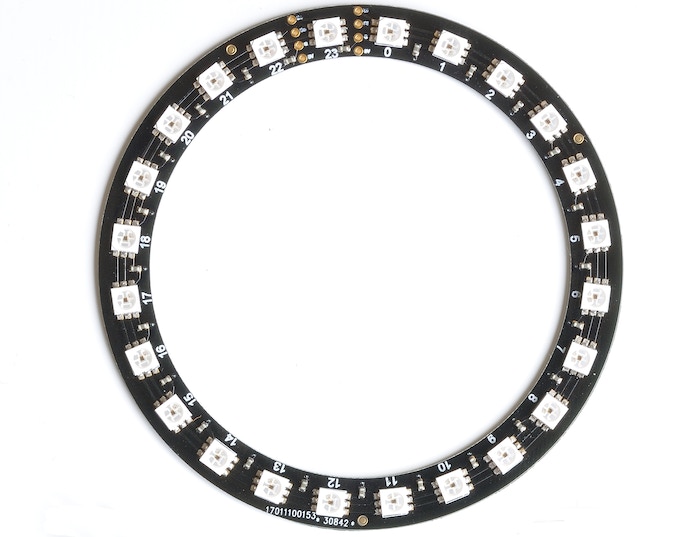 RasPiO Inspiring uses SK9822 LEDs which are controlled using SPI. I’ve written a Python class for Raspberry Pi use. It’s really quite simple to use…

For other platforms, there’s a fantastic library called FastLED which can be used with Arduino and ESP8266 devices.

Each colour of each LED is rated at 20 mA, so a pyramid’s 72 LEDs could draw as much as 4.3A at full tilt. In practice you never really use maximum brightness on all three colours at once.

For most applications you can take power from the Pi, if your PSU has enough juice. But, if you need to, you can connect an external 5V source and use the alternative connections on the driver board (or add supplementary wires directly to 5V/GND on the LED boards)

Documentation is very clear and comprehensive. Take a look at the user guide and videos. Software and drivers for RasPiO InsPiRing